This book provides samples that are relevant to each task being performed. The book provides an in-depth coverage of the Apache Geronimo internals, in order for the user to be able to write custom services on Geronimo. There is also coverage of the Geronimo plugin architecture and how to extend the server functionality through plugins. The authors have made the different configuration items available as self contained chapters that can be referred to independently of the other chapters, so that readers can go straight to whatever part of Geronimo they want to configure.

What This Book Covers

Chapter 1: Introduction – This chapter introduces the reader to the Apache Geronimo Application Server, lists the features that it provides, and the steps that the user has to follow in order to download, install, and start the server.

Chapter 2: Architecture – This chapter gives a high-level overview of the Geronimo architecture. It introduces the reader to the concepts of GBeans, Geronimo Plugins, and the different subsystems of Geronimo.

Chapter 4: JMS – This chapter details the messaging features that Geronimo provides, and guides the user through using the bundled JMS provider, ActiveMQ, to create and use JMS resources.

Chapter 6: Security – This chapter takes the user through configuring security in order to secure the server environment and the applications running in Geronimo.

Chapter 8: JNDI – This chapter describes the different JNDI environments in Geronimo, gives the steps necessary to bind custom resources to JNDI by using GBeans, and shows us how the global JNDI environment can be leveraged for user’s applications.

Chapter 10: Administration – This chapter walks the user through the common administration tasks, such as managing server components, application management, monitoring, working with keystores, and GShell.

Chapter 13: Logging – This chapter covers all of the configurations required for setting up logging for both the server and user applications. It covers logging frameworks such as log4j JUL, and so on, and the SLF4j wrapper that comes with Geronimo.

Chapter 14: Geronimo Internals – This chapter introduces the user to the internals of Geronimo and the low-level services such as kernel, server info, configuration manager, and so on. It takes the user through developing and deploying new services through GBeans.

In this section, we will develop our very own plugin, the World Clock plugin. This is a very simple plugin that provides the time in different locales. We will go through all of the steps required to develop it from scratch. These steps are as follows:

There are many ways in which you can develop plugins. You can manually create all of the plugin artifacts and package them. We will use the easiest method, that is, by using Maven’s geronimo-plugin-archetype. This will generate the plugin project with all of the artifacts with the default values filled in.

To generate the plugin project, run the following command:

In the same directory in which the WorldClock directory is created, you will need to create a java project that will contain the source code of the plugin. We can create this by using the following command:
[code]&lt;b&gt;mvn archetype:create -DgroupId=com.packt.plugins -DartifactId=WorldClock
Module
[/code]
This will create a java project with the same groupId and artifactId in a directory called WorldClockModule. This directory will contain the following artifacts:

You can safely remove the second and third artifacts, as they are just sample stubs generated by the archetype.

In this project, we will need to modify the pom.xml to have a dependency on the Geronimo kernel, so that we can compile the GBean that we are going to create and include in this module. The modified pom.xml is shown below:

For simplicity, we have only one GBean in our sample. In a real world scenario, there may be many GBeans that you will need to create. Now we need to create the GBean that forms the core functionality of our plugin. Therefore, we will create two classes, namely, Clock and ClockGBean. These classes are shown below:

As you can see, Clock is an interface and ClockGBean is a GBean that implements this interface. The Clock interface exposes the functionality that is provided by the ClockGBean. The doStart(), doStop(), and doFail() methods are provided by the GBeanLifeCycle interface, and provide lifecycle callback functionality. Refer to Chapter 14, Geronimo Internals, for more detailed explanations on writing your own GBeans. The next step is to run Maven to build this module. Go to the command prompt, and change the directory to the WorldClockModule directory. To build the module, run the following command:

Now change the directory to WorldClock, and open the generated pom.xml file. You will need to uncomment the deploymentConfigs for the gbeanDeployer, and add the following module that you want to include in the plugin:

Once the plan is ready, go to the command prompt and change the directory to the WorldClock directory. Run the following command to build the plugin:

You will notice that the car-maven-plugin is invoked and a WorldClock-1.0-SNAPSHOT.car file is created in the WorldClock/target directory. We have now completed the steps required to create an Apache Geronimo plugin. In the next section, we will see how we can install the plugin in Apache Geronimo.

The pluggable Administration Console functionality is based on the support provided by the Apache Pluto portlet container for dynamically adding and removing portlets and pages without requiring a restart. Apache Geronimo exposes this functionality through two GBeans, namely, the Administration Console Extension (ACE) GBean org.apache.geronimo.pluto.AdminConsoleExtensionGBean) and the Portal Container Services GBean (org.apache.geronimo.pluto.PortalContainerServicesGBean). The PortalContainerServicesGBean exposes the features of the Pluto container in order to add and remove portlets and pages at runtime. The ACE GBean invokes these APIs to add and remove the portlets or pages. The ACE GBean should be specified in the Geronimo-specific deployment plan of your web application or plugin, that is, geronimo-web.xml. The architecture is shown in the following figure: 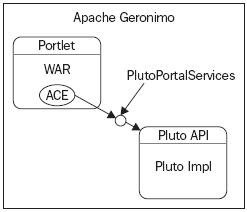 We will now go through the steps to develop an Administration Console Extension for the World Clock plugin that we created in the previous section.

Once you log in to the Administration Console, you will notice a World Clock link at the bottom of the console navigation menu in the Other section. Clicking on it will bring up the page shown in the following screenshot: 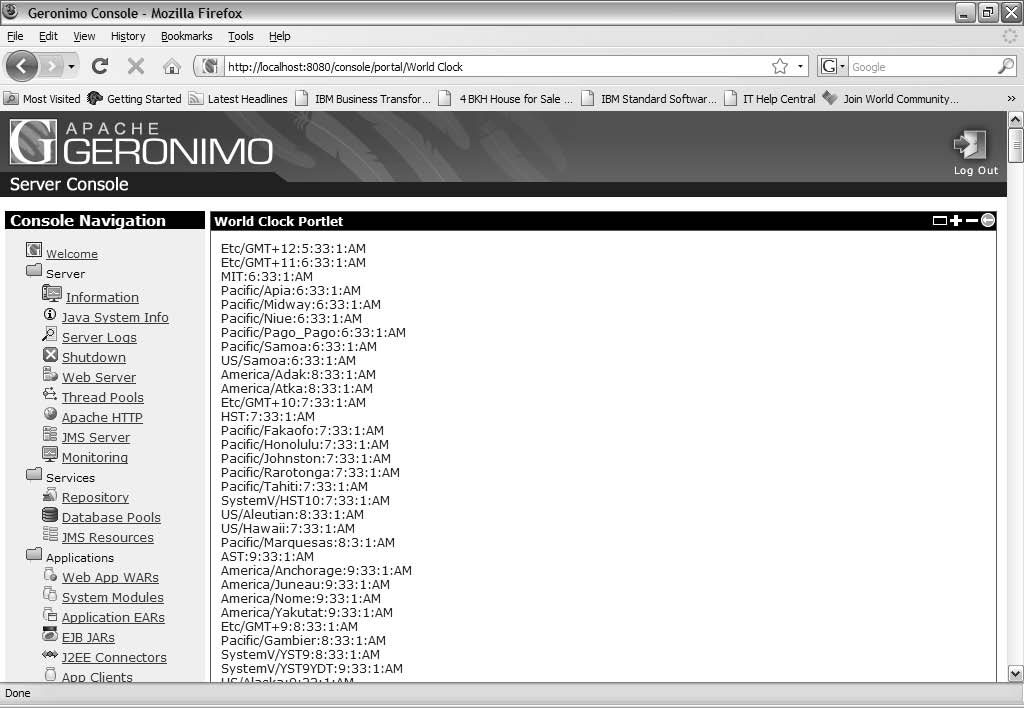 The Plugins portlet enables a user to dynamically install new features into the Geronimo server, create plugins out of existing configurations on the server, and create server assemblies consisting of some or all of the existing plugins in the server. By using the Install Geronimo Plugins section, you can search for plugins in a plugin repository or add new repositories for plugin searches. You can also download running configurations from another Geronimo server, just as if you’re browsing and installing third-party plugins by using the repository URL http://remote-geronimo-server:8080/plugin/maven-repo/ and providing the administrator username and password.

In order to search for plugins, select the repository URL, and click on Show Plugins in selected repository. This will show all of the available plugins in that repository, as shown in the next screenshot: 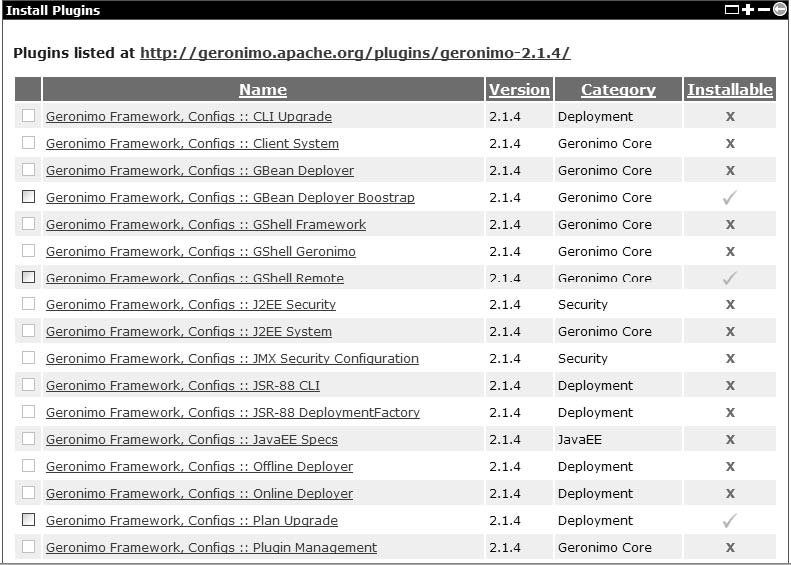 A check mark in the Installable column for the plugin name indicates that the plugin is installable. You can click on the plugin name to view the details of the plugin. You can select one or more plugins, and click on Install to install the plugins. The portlet will show the status as the plugins are installing and display a confirmation message once completed.

The Create Geronimo Plugin section lets you create a new plugin out of an existing configuration on the server. Select the configuration to be exported as a plugin, and click on the Export Plugin button. On the next page, you can fill in various details, such as Download Repositories that need to be looked in for downloading Dependencies, a Description of the plugin, the Geronimo Versions on which the plugin can be installed, JVM versions, the dependencies of this plugin on other configurations or artifacts, Prerequisite configurations, and so on. The fields have detailed explanation on this page. After completing the fields, click on Save Plugin Data. On the next screen, click on the Export Plugin button to save the plugin to filesystem. The configuration will be saved as a configuration archive (CAR) file.

Apache Geronimo provides a feature known as custom server assemblies. This allows users to assemble servers that are customized to their needs. They can assemble the application servers that contain their applications or plugins prepackaged with only the additional dependent modules that their applications or plugins require. We will go through the steps to assemble a custom server that contains the World Clock plugin as follows: 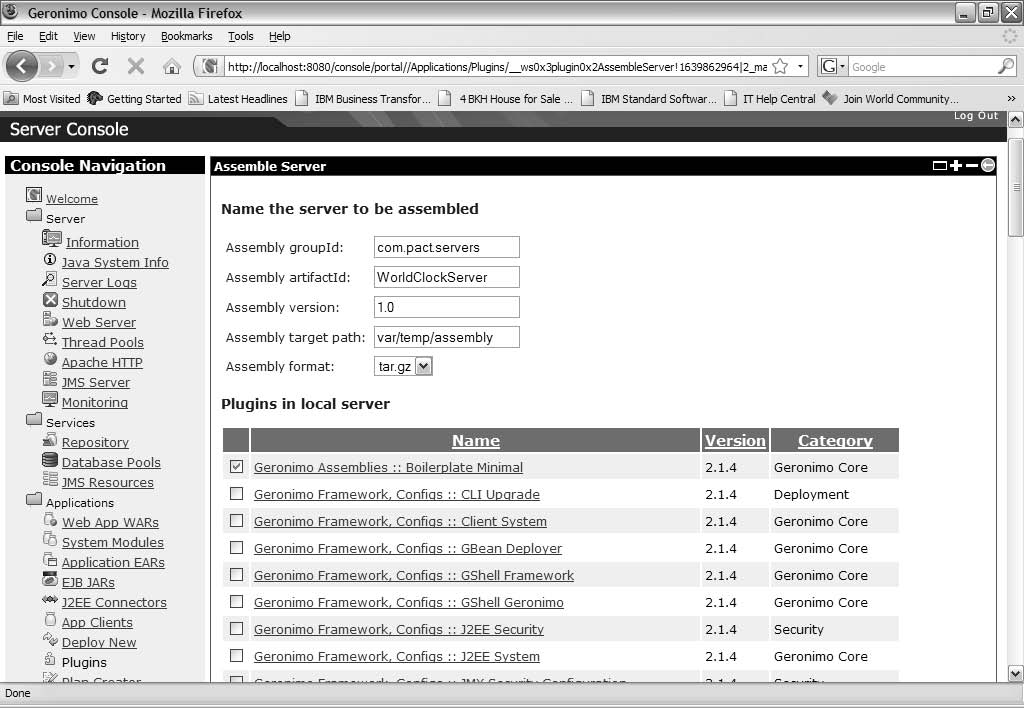 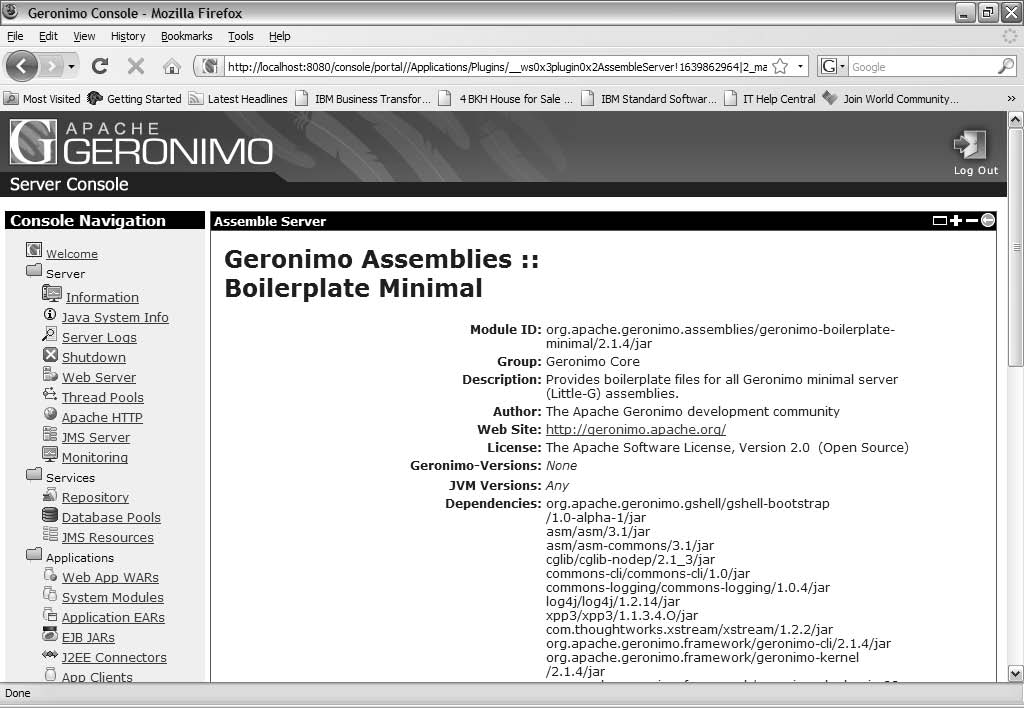 In this chapter, we saw how Apache Geronimo’s plugin architecture provides the capability for users to extend the functionality of the server. We saw how we can develop a plugin and deploy it to the server. We also had a look at the pluggable administration console, and how to create and plug in a new Administration Console portlet. We also saw how Apache Geronimo allows users to export custom server assemblies. In conclusion, Apache Geronimo turns out to be a very modular, customizable, and flexible application server. In the next chapter, we will see how we can administer Apache Geronimo. We will look into administering the different resources, plugins, and applications that are deployed on the server, as well as other server configuration options.