This article is based on Flex on Java , published on October 2010. It is being reproduced here by permission from Manning Publications. Manning publishes MEAP (Manning Early Access Program,) eBooks and pBooks. MEAPs are sold exclusively through Manning.com. All pBook purchases include free PDF, mobi and epub. When mobile formats become available all customers will be contacted and upgraded. Visit Manning.com for more information. [ Use promotional code ‘java40beat’ and get 40% discount on eBooks and pBooks ]

Flex and Flash provide powerful drawing libraries that we could leverage to create our custom graph components, but we’re going to leverage an open source graphics library called Degrafa. Using Degrafa gives us the ability to declaratively build our graphing components rather than having to deal with the complex calculations involved in drawing pie chart slices as illustrated in listing 1, which shows an example ActionScript class specifically for drawing a pie chart slice found at http://www.adobe.com/devnet/flash/articles/adv_draw_methods.html. Notice how much trigonometry is involved in creating something as simple as a pie chart slice from scratch.

Before diving into developing the component, let’s familiarize ourselves with some of the terms and concepts that we’ll see as we work through this example. 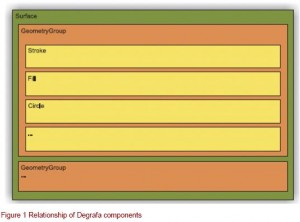 We’re only going to scratch the surface; to learn more about Degrafa, you can start with the Foundation section of the documentation at http://www.degrafa.org/samples/foundation.html.

Creating a pie chart for fun and profit

Now that we have some of the basic concepts, let’s get on with the task of creating a custom pie chart component. We were inspired by a blog posting by Derrick Grigg titled appropriately enough Degrafa Pie Chart, which can be found at http://www.dgrigg.com/post.cfm/04/15/2008/Degrafa-Pie-Chart. After we decomposed it and removed some of the extra visual effects such as tweening and gradients, it barely resembles what we started with. Figure 2 shows a mock-up of the chart we’ll be developing in this article. 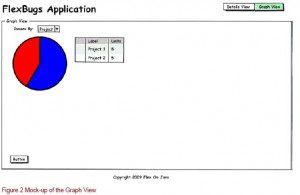 For this example you’ll be developing only a single pie chart component, but some of the concepts illustrated here could potentially be applied to creating any number of charting components.

The component you’ll develop is a combination of a pie chart and a data grid, which will serve the purpose of a legend for the pie chart. Without this it may be difficult for someone looking at the chart to differentiate between data points on the graph. The pie chart will consist of the pie chart itself and another component for each of the slices that make up the chart. You’ll also develop a simple custom ItemRenderer for the chart legend to draw a simple box inside one of the cells in the data grid.

You’ll also be adding a label and a combo box to the GraphView to allow the user to change the data the chart shows. By changing the value of the combo box the user can show how many issues there are by project, type, status, or severity.

We’re going to create a new custom event for our pie chart. The reason we’re creating a new one is that if we ever wanted to put more than one pie chart component into our application, we’d need to be able to distinguish which component fired the event.

Listing 2 PieChartEvent.as
[code lang=”java”] package org.foj.event {
import flash.events.Event;
public class PieChartEvent extends Event{
public static const DATA_PROVIDER_UPDATED:String =
"dataProviderUpdated";
public var data:*;
public var id:*; #1
public function PieChartEvent(type : String,
bubbles : Boolean = true,
cancelable : Boolean = false)
{
super(type, bubbles, cancelable);
}
}
}
#1 id property[/code]
This event differs from the one created previously in the addition of an id property (#1). This is done so that the presenter can decide whether or not it needs to react to the event. With the new event created, you can move on to creating the component itself.

First, you’ll develop the view that contains the pie chart and legend. You’ll create these view components in a new package, so create a file named PieChart.mxml in the org.foj.components package of your project. The following listing shows the first part of the code for the PieChart view.

The next component you’re going to create is the custom ItemRenderer for the pie chart legend. This simple component will draw a colored box in the data grid cell to correspond with the colors of the pie chart.

Listing 6 PieLegendRenderer.mxml
[code lang=”xml”] <?xml version="1.0" encoding="utf-8"?>
<mx:HBox xmlns:fx="http://ns.adobe.com/mxml/2009"
xmlns:s="library://ns.adobe.com/flex/spark"
xmlns:mx="library://ns.adobe.com/flex/halo"
xmlns:degrafa="http://www.degrafa.com/2007"> #1
<mx:Spacer width="2"/> #2
<degrafa:Surface>
<degrafa:GeometryGroup>
<degrafa:fill> #3
<degrafa:SolidFill id="fill">
<degrafa:color>{data.legend}"</degrafa:color> #4
</degrafa:SolidFill>
</degrafa:fill>
<degrafa:RegularRectangle #5
width="20"
height="20"
fill="{fill}"/>
</degrafa:GeometryGroup>
</degrafa:Surface>
</mx:HBox>
#1 Extends HBox Spacer to help align box
#2 SolidFill for rectangle
#3 Color of legend item
#4 Rectangle[/code]
The ItemRenderer is extending HBox (#1) because all ItemRenderer objects for the DataGrid component must be halo components. Add a Spacer component (#2) to help align the rectangle the way you want it. The SolidFill component (#3) defines the fill color for the RegularRectangle (#5). Now that you’ve finished creating all the visual components for the pie chart, let’s move on to creating the Presenter. An implicitly defined variable is available to the ItemRenderer named data, which corresponds to the item in the dataProvider that you’re rendering. Use this implicit variable to set the color of the Fill object (#4), which is contained in the legend property of the object.

Presenter for the PieChart

You then define the event handler method for the event that is fired whenever the dataProvider for the view is updated (#4). Inside this method you check to see if the id of the component firing the event is the same as the id that created this Presenter.

That way if there are multiple pie chart components, this method can determine whether or not it needs to react.

The createSlices method (#5) checks to see if the data provider has more elements contained in it than there are pie chart slices in your pie chart. If there are more elements in the data provider, it will create more pie chart slices. In the set-LegendColors method (#6) you iterate through the items in the dataProvider and set the legend property of the item to the corresponding color, which you’ll get from the pie chart model class.

After all of that, refresh your pie chart with a call to the redrawSlices method (#7).

This will iterate over the pie chart slices and update the data values, such as the start angle of the slice and its arc. You iterate over the pie chart slices instead of the data provider because there may be more slices than items in the dataProvider, and this will draw the extra slices with an arc of 0. There is also a little workaround (#8) for when there is only a single slice and its arc is 360, which sets its arc to 359.99 so that it would draw correctly.

After all of the data for the slice is updated, it is passed into the redrawSlice method (#9) to tell the slice to redraw itself.

Model for the PieChart

Now you only have one piece of the MVP triad to complete for your pie chart. Even though the pie chart doesn’t need to call out to any remote services, you’ve still refactored a couple of methods that could be considered business logic rather than presentation logic and have no need to maintain any kind of state. The following listing shows the code for the pie chart model.

In this article, we’ve introduced the Degrafa framework and created a custom pie chart component. Using Degrafa gives us the ability to declaratively build our graphing components rather than having to deal with complex calculations.