The inheritance is one of the most scenarios that can be encountered once we’ve been coming into business field. Inside the Java Persistence API (JPA) The entities support inheritance, polymorphic, polymorphic associations, and polymorphic queries. Both abstract and concrete classes can be entities, and both of them can be annotated with the @Entity annotation, mapped as entities and queried for as entities.

The Mapping of class hierarchies has different implementation techniques, that’s depends on the Java Persistence API (JPA) vendor. It is important to know that this tutorial consider the EclipseLink – JPA as a JPA provider, so be sure that you are willing enough to use the EclipseLink.(See EclipseLink Maven Installation and EclipseLink Installation).

To implement an inheritance you’ve different implementations that might be used:

In the single table inheritance, the entire hierarchy is represented by a single table, in that the entity of super class defines set of mapped states and the entity of subclass inherits most of its mapped states from its super class entity.The discriminator column (TYPE) is added to the table to distinguish between the stored instances. That’s column will determine what class in the hierarchy the stored object belongs to. Also, additional columns will be added into that table for those newly defined attributes in the sub classes entities.

In the joined table inheritance, each class shares data from the root table. In addition, each subclass defines its own table that adds its extended state. Where the shared data is stored in a single table while the newly defined fields are stored in separate table.

At this tutorial, we will cover the Table Per Concrete Strategy for achieving the inheritance mapping, the next coming tutorial shall cover other strategies.

Let’s assume an inheritance hierarchy, in that Project entity represents the root of it and set of entities inherit the Project like GlobalProject and LocalProject entities.

Let’s see a class design for the suggested inheritance relationship at the Figure 1.1: 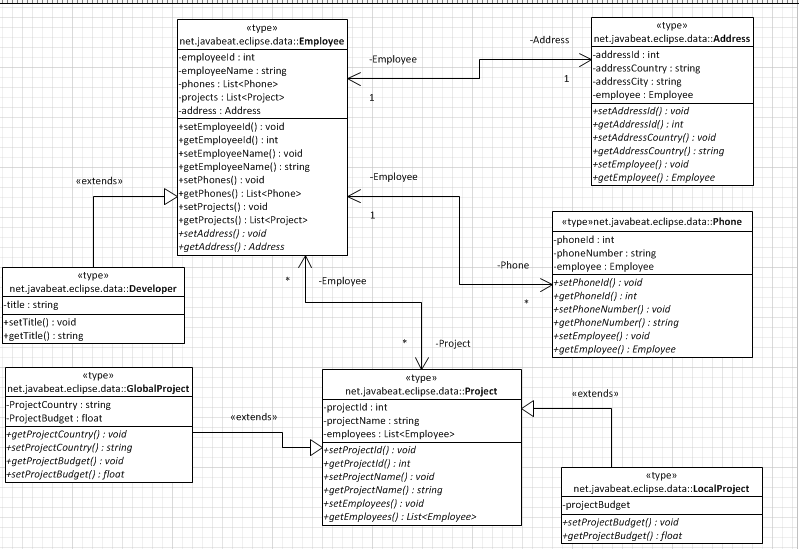 Based on the design of classes that shown in the Figure 1.1, you’ve seen a different inheritance relationships achieved between both of Employee and Developer from a side and Project, GlobalProject and LocalProject from a different side.

This time we’re using the Table Per Concrete Strategy rather using of Joined Strategy as you’ve seen before in the Joined Inheritance tutorial.

Table per class inheritance allows inheritance to be used in the object model, when it doesn’t exist at the data model. In table per class inheritance, a table is defined for each concrete class in the hierarchy to store all attributes of that class and all of its super classes. We’ve changed the design of the Project entity and its sub classes for enabling the Table Per Concrete philosophy or strategy, so see the Figures 1.2,1.3 and 1.4 that shows you the final form of suggested tables.

The following snippet of code must shows you a proper clarification for the final form of the Project, GlobalProject and LocalProject entities respectively.

We need no any change that could happen at the Persistence Configuration (persistence.xml). So you could use the previous one that’s used in the Join Inheritance.

Use the same executable application mentioned at Join Inheritance for achieving the persistence operation. it should work properly, cause nothing changed at the executable class.

This tutorial covers the @Inheritance annotation and its used for achieving an inheritance relationship. Already we’ve established a Project entity and both of GlobalProject and LocalProject inherit it. When you are coming into inheritance, you have multiple choices to implement it. One of the major strategies that could be used is a Table Per Concrete Strategy which in all classes in the hierarchy persisted in their own tables. The main difference between the Joined Strategy & Table Per Concrete is the Table per concrete doesn’t consider any previous records that could be inserted into the Super class Table, while the Join Inheritance consider it.