This article is based on Android in Practice, to be published on Summer 2011. It is being reproduced here by permission from Manning Publications. Manning publishes MEAP (Manning Early Access Program,) ebooks and pbooks. MEAPs are sold exclusively through Manning.com. All print book purchases include an ebook free of charge. When mobile formats become available all customers will be contacted and upgraded. Visit Manning.com for more information.

The standard Java class library already has a solution for HTTP messaging. An open-source implementation of these classes is bundled with Android‘s class library, which is based on Apache Harmony. It’s simple and bare-bones in its structure and, while it supports features like proxy servers, cookies (to some degree), and SSL, the one thing that it lacks more than anything else is a class interface and component structure that doesn’t leave you bathed in tears. Still, more elaborate HTTP solutions are often wrappers around the standard Java interfaces and, if you don’t need all the abstraction provided, for example, by Apache HttpClient interfaces, the stock Java classes may not only be sufficient, they also perform much better thanks to a much slimmer, more low-level implementation.

You must perform simple networking tasks via HTTP (such as downloading a file) and you want to avoid the performance penalty imposed by the higher-level, much larger, and more complex Apache HttpClient implementation.

This connection implementation lookup by URL scheme is performed by a protocol handler object. The Java class library and Android already provide protocol handlers for all common schemes such as HTTP(S), FTP, MAILTO, FILE, and so on, so typically you don’t have to worry about that. This,of course, also means that you are free to create your own protocol handlers that instantiate your own custom URLConnection. URLConnection is based on TCP sockets and the standard java.io stream classes. That means I/O is blocking, so remember to never run them on the main UI thread.

Let’s see how it works in a practical example. We want to extend the MyMovies application to display a simple message dialog with the latest update news downloaded from a Web server so the user is always up to date about what has changed in the latest release. For this to work, we just have to place a text file containing the update notes somewhere on a Web server, download and read the file, and display its text in a message dialog. Figure 1 shows what that will look like. 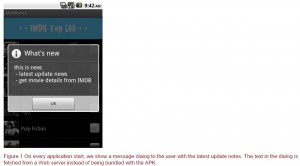 For simplicity, we will show the dialog on every application start, a “detail” that would probably annoy the heck out of your users if this were a production release, but the example serves our purpose well enough. Implementation wise, the plan is to write an AsyncTask that establishes a connection to an HTTP server via HttpURLConnection and downloads the file containing the update notes text. We then send this text via a Handler object to our main activity so we can show an AlertDialog with that text. Let’s look at the MyMovies activity class first, which contains the callback for the handler to show the pop-up dialog (listing 1).

We launch the UpdateNoticeTask in the last line of onCreate() since that’s where the download proceeds. Listing 2 has the source code.

After reading the URL from the parameters, the first thing we have to do is use that URL object to retrieve an instance of a fitting URLConnection instance (#1)—an HttpURLConnection in this case, since our URL has the http:// scheme). Note that the call to openConnection() does not yet establish a connection to the server, it merely instantiates a connection object. We then configure our HTTP request (#2): we first tell it that it should use the GET method to request the file (we could have also omitted this call, since GET is the default) and also set an HTTP Accept header to tell the server what kind of document type we expect it to return—plain text in this case. The request is now configured and can be sent to the server by a call to connect() (#3). Depending on the server reply, we either return an error message if we received a status message that was not 200/OK (#4) or proceed to read the text from the response body (#5). Don’t forget to close the connection when you are done processing the response (#6). Finally, we send the text we received from the server to our main activity using the Handler (#7).

The example we showed here was extremely simple—the simplest kind of request you can send, really. For these scenarios, HttpURLConnection does the job quite well. The biggest problem with it is its class architecture. HttpURLConnection shares a large part of its interface with the general purpose URLConnection (obviously, since it inherits from it), which means that some abstraction is required for method names. If you’ve never used HttpURLConnection before, you have probably pondered the call to setRequestProperty(), which is the way to set HTTP headers—not very intuitive. This is simply because implementations for other protocols may not even have the concept of header fields but would still share the same interface, so the methods in this class all have rather generic names.

While this is just a cosmetic thing, the actual problem with URLConnection is its entire lack of a proper separation of concerns. The request, the response, and the mechanisms to send and receive them are merged into a single class, often leaving you wondering which methods to use to process which part of this triplet. This is a bit like creating a five-course meal just to stick it in the blender: you can still serve it, but it’s just disgusting. It also makes each part difficult to customize and even more difficult to mock out when writing unit tests. It’s simply not a beaming example of good object-oriented class design.

There are also some more practical problems with this class. If you find yourself in a situation where you need to intercept requests to preprocess and modify them (a good example is message signing in secure communication environments, where the sender needs to compute a signature over a request’s properties and then modify the request to include the signature), then HttpURLConnection is not a good choice for sending HTTP requests. That’s because request payload is sent unbuffered, so there is no way to get your hands on it in a non-intrusive way. Last but not least, HttpURLConnection in Apache Harmony has bugs—serious bugs. One of the major ones is detailed in the sidebar.

As you already know, the Java class library bundled with Android is based on Apache Harmony, the open-source Java implementation driven by the Apache foundation. At the time of this writing, there is a serious bug that affects HTTP messaging using HttpURLConnection: it sends HTTP header field names in lowercase. This is nonconformant to the HTTP specification and, in fact, breaks many HTTP servers since they will simply drop these header fields. This can have a wide array of effects, with documents served to you in the format that doesn’t match your request (for example, the Accept header field was ignored) and failed requests to protect resources due to the server’s failure to recognize the Authorization header field. A workaround is simply to not use HttpURLConnection until these problems have been fixed and use Apache HttpClient instead. If you want to follow the progress of fixing this bug, you can find the official issue report at this Web address: http://code.google.com/p/android/issues/detail?id=6684.

Overall, HttpURLConnection is a simply structured but rather low-level way of doing HTTP messaging, and its clumsy interface, lack of object-orientation, and proper abstractions make it difficult to use. For simple tasks like the file download shown here it’s absolutely fine and comes with the least overhead (it doesn’t take a sledgehammer to crack a nut) but, if you want to do more complex things like request interception, connection pooling, or multipart file uploads, then don’t bother with it—there’s a much better way to do this in the Java world and, thanks to the engineers at Google, it’s bundled with Android!