In this tutorial I am going to explain Java exceptions in details and how to use them in the real applications. One of the important measure to assess the quality of your Java code is to review the exception handling and how exceptions scenarios are handled.

If you have to write an efficient exception handling, then you should have good understanding on the exception hierarchy and different categories of the exception. Let’s read this tutorial and share your feedback at the comments section.

What is an Exception? 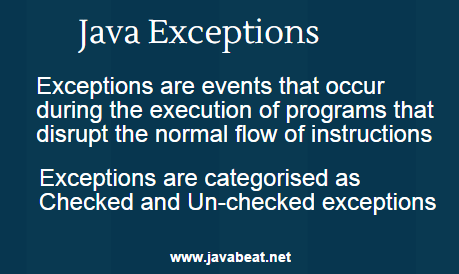 Exceptions are events that occurs when executing the programs that will disrupt or terminate the normal flow of the program. In Java, an exception is an object that contains the type of the exception and details of the root cause for that exception.

It is very important to understand the basic exception hierarchy of Java exception classes.

There are three types of exception categories:

Look at the following code:

Some of the example for the checked exceptions are:

Look at the bellow code snippet:

In the above code, the variable sb is not initialized after its declaration. Since it will have the default value of null, it will throw NullPointerException while accessing the methods. There will not be any compiler error at the compile, these errors are thrown only at the runtime. Hence, the developer should not handle these exceptions in code.

Few of the runtime exceptions are :

Look at the below code:

How to Handle Exceptions?

This section going to walk through the exception handling in Java. We all know that handling of exception is good practice for applications. But, how to do that?. Java provides keywords try,catch,finally,throw and throws for handling the exceptions. We will go through each one in detail and how to use them in your Java program.

Here is the example of a try and catch block:

Finally blocks are executed always even there is exception thrown by the applications. It is good practice to put the code which must be executed for cleaning up the resources, etc. For example : If you want to close the database connection or close the file operations, finally block is the right place to write that code.

Finally block appears after the try or catch block. The syntax for the finally block looks like this:

Let’s look at the simple example for throw:

In the above example exceptions are re-thrown from the catch block and handled in another method. It is good practice to re-throw exceptions only when we are not handling in that particular method and handling in the caller method.

Here is the simple example for using throws clause:

I have written a very simple custom exception that would explain you the real purpose for writing our own exception. Let’s look at the below code:

When you run the above program you will get the following exception message:

Above example implements a custom exception InSufficientFundException to throw error message when there is not enough fund in the bank account, probably there will be a check in the application and then this exception will be thrown. I felt it is irrelevant to write more code for account operations and that is not our goal here. We have to understand how to write a custom exception class.

When you create a custom exception instance, you can pass the message and Throwable object to the super class exception. Also you can override the getMessage method to customize the error message shown in the exception.

Let’s look at a simple example:

Another improvement in Java 7 is introduction of try-with-resource statement for auto-closing the resource instances. A resource is an object, that must be closed after it finished the operation. Any object that implements the class java.lang.AutoCloseable or java.io.Closeable can be used as a resource.

Let’s look at the example snippet:

If you want to read more about this feature, please our previous tutorial on try-with-resource block or official documentation.

Another nice feature introduced in the Java 7 release is the handling of suppressed exception while using the try-with-resource block. Prior to java 7, second exception thrown while closing the resource was suppressed and not shown to the user.

1. Never suppress the exceptions in the catch block

2. Always catch the specific exception class in the catch block instead of just catching the java.lang.Exception class.

3. Don’t throw exception from the finally block. If finally throws exception, it will be lost forever. If there is a case that finally would thrown an exception, either you handle it or log the error message. Don’t allow the exception to be un-handled.
4. Always catch the exceptions that you can handle. This is one of the important best practice to be remembered. If you look at many of the applications, there will be a catch block and there won’t be any statements for handling the exceptions. For the worst case, missing any log statements. This becomes very difficult to trace the issue if you suppress the errors.
5. Use finally blocks instead of catch blocks if you are not going to handle the exceptions.

This tutorial explained the basic idea behind writing the exceptions, different categories of exceptions, exception handling, how to write custom exceptions and finally the best practices for writing the efficient exceptions for your application. If you have any questions please write it in the comments section.