This article is based on Mahout in Action, to be published on June, 2011. It is being reproduced here by permission from Manning Publications. Manning publishes MEAP (Manning Early Access Program,) eBooks and pBooks. MEAPs are sold exclusively through Manning.com. All pBook purchases include free PDF, mobi and epub. When mobile formats become available all customers will be contacted and upgraded. Visit Manning.com for more information. [ Use promotional code ‘java40beat’ and get 40% discount on eBooks and pBooks ]

There are many clustering algorithms in Mahout, and some work well for a given dataset while others don’t. K-Means is a very generic clustering algorithm, which can be molded easily to fit almost all situations. It’s also simple to understand and can easily be executed on parallel computers.

K-Means is to clustering what Vicks is to cough syrup. It’s a simple algorithm and is more than 50 years old. Stuart Lloyd first proposed the standard algorithm in 1957 as a technique for pulse code modulation. However, it wasn’t until 1982 before it got published. It’s widely used as a clustering algorithm in many fields of science. The algorithm requires the user to set the number of clusters, k, as the input parameter.

What we really want to talk about is the Fuzzy K-Means algorithm, but in order to explain it we first need you to know what K-Means is all about.

All you need to know about K-Means

K-Means algorithm puts a hard limitation on the number of clusters, k. This limitation might cause you to doubt the quality of this method. Fear not—this algorithm has proven to work very well for a wide range of real-world problems over the last 25 plus years of its existence. Even if the estimate of the value k is suboptimal, the clustering quality is not affected much by it.

Suppose we are clustering news articles to get top-level categories like politics, science, and sports. For that we might want to choose a small value of k, which is in the range of 10 to 20. If you’re looking to cluster some subtopics, you need a larger value of k, like 50 to 100. Imagine there are one million news articles in our database and you are trying to find out groups of articles that discuss the same story. The number of such related stories would be much smaller than the entire corpus—perhaps, in the range of 100 articles per cluster. This means, we need a k value of 10000 to generate such a distribution. This surely would test the scalability of clustering and that’s where Mahout shines the brightest.

For good quality clustering using K-Means, we will need to estimate the value of k. An approximate way of estimating k is to figure it out based on the data we have and the size of clusters we need. In the case above, if there are around 500 news articles published about every story, we should be starting our clustering with a k value like 2,000.

This is a crude way of estimating the number of clusters. Nevertheless, K-Means algorithm generates decent clustering even with this approximation. The type of distance measure used mainly determines the quality of K-Means clusters.

Let’s look at K-Means algorithm in detail. Suppose we have n points, which we need to cluster into k groups. K-Means algorithm will start with an initial set of k centroid points. The algorithm does multiple rounds of the processing and refines this centroid location until the iteration max-limit criterion is reached or until the centroids converge to a fixed point from which it doesn’t move very much. A single K-Means iteration is illustrated clearly in figure 1. The actual algorithm is a series of such iteration, till it encounters the criteria above.

There are two steps in this algorithm. The first step finds the points, which are nearest to each centroid point, and assigns them to that specific cluster. The second step recalculates the centroid point using the average of the coordinates of all the points in that cluster. Such a two-step algorithm is a classic case of what is known as Expectation Maximization (EM) Algorithm. The algorithm is a two-step process, which is repeated until convergence is reached. The first step—the expectation (E) step—finds the expected points associated with a cluster. The second step, known as the maximization (M) step, improves the estimation of cluster center using the knowledge from the E step. A complete discourse on expectation maximization is beyond the scope of this article, but plenty of explanations and resources on EM are found online. 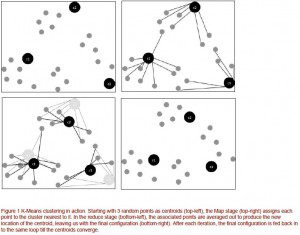 The K-Means clustering algorithm is run using either the KMeansClusterer or the KMeansDriver class. The former one does an in-memory clustering of the points while the latter is an entry point to launch K-Means as a Map/Reduce job. Both methods can be run like a regular Java program and can read and write data from the disk. They can also be executed on a Hadoop cluster reading and writing data to a distributed file system.

For this example, we are going to use a random point generator function to create the points. It generates the points in the Vector format as a normal distribution around a given center. The points are scattered around in a natural manner. These points are going to be clustered using the in-memory K-Means clustering implementation in Mahout.

The generateSamples function in the listing 9.1 below takes a center say (1,1), the standard deviation (2), and creates a set of n (400) random points around the center, which behaves like a normal distribution. Similarly we will create two other sets with centers (1,0) and (0,2) and standard deviation 0.5 and 0.1 respectively. In listing 1, we run the KMeansClusterer using the following parameters: 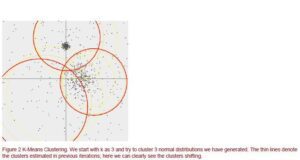 The DisplayKMeans class kept in the “examples” folder of the Mahout code is a great tool to visualize the algorithm in a two-dimensional plane. It shows how the clusters shift their position after each iteration. It is also a great example of how clustering is done using KMeansClusterer. Just run the DisplayKMeans as a Java Swing application and view the output of the example given in figure 2.

Note that the K-Means in-memory clustering implementation works with a list of Vector objects. The amount of memory used by this program depends on the total size of all the vectors. The sizes of clusters are larger compared to the size of the vectors in the case of sparse vectors or the same size for dense vectors. As a rule of thumb, assume that the number of vectors that could be fit in memory equals the number of data points + k centers. If the data is huge, we cannot run this implementation.

This is where MapReduce shines. Using the MapReduce infrastructure, we can split this clustering algorithm to run on multiple machines, with each Mapper getting a subset of the points and nearest cluster computed in a streaming fashion.

What’s so fuzzy about Fuzzy K-Means?

As the name says, the Fuzzy K-Means algorithm does a fuzzy form of K-Means clustering. Instead of exclusive clustering in K-Means, Fuzzy K-Means tries to generate overlapping clusters from the dataset. In the academic community, it’s also known by the name Fuzzy C-Means algorithm. We can think of it as an extension of K-Means. K-Means tries to find the hard clusters (a point belonging to one cluster), whereas Fuzzy K-Means discovers the soft clusters. In a soft cluster, any point can belong to more than one cluster with a certain affinity value towards each. This affinity is proportional to the distance of point to the centroid of the cluster. Like K-Means, Fuzzy K-Means works on those objects that can be represented in n-dimensional vector space and has a distance measure defined.

The algorithm is available in the FuzzyKMeansClusterer or FuzzyKMeansDriver class. The former is an in-memory and the latter a MapReduce implementation. We are going to use a random point generator function to create the points scattered in a two-dimensional plane.

In listing 2, we run the in-memory version using the FuzzyKMeansClusterer with the following parameters:

The DisplayFuzzyKMeans class in the “examples” folder of the Mahout code is a good tool to visualize this algorithm on a 2-dimensional plane. DisplayFuzzyKMeans runs as a Java swing application and produces an output as given in the figure 3.

Before running the MapReduce implementation, let’s create a checklist for running Fuzzy K-Means clustering against the Reuters dataset like we did for K-Means. We have:

To run the Fuzzy K-Means clustering over the input data, use the Mahout launcher using the fkmeans program name as follows:

Like K-Means, FuzzyKMeansDriver will automatically run the RandomSeedGenerator if the number of clusters (k) flag is set. Once the random centroids are generated, Fuzzy K-Means clustering will use it as the input set of k centroids. The algorithm runs multiple iterations over the dataset until the centroids converges, each time creating the output in the folder cluster-*. Finally, it runs another job, which generates the probabilities of a point belonging to a particular cluster based on the distance measure and the fuzziness parameter (m).

It’s a good idea to inspect the clusters using the ClusterDumper tool. ClusterDumper shows the top words of the cluster as per the centroid. To get the actual mapping of points to the clusters, we need to read the SequenceFiles in the points/ folder. Each entry in the sequence file has a key, which is the identifier of the vector, and a value, which is the list of cluster centroids with an associated numerical value, which tells us how well the point belongs to that particular centroid.