This article is based on iOS 4 in Action, to be published on June 2011. It is being reproduced here by permission from Manning Publications. Manning publishes MEAP (Manning Early Access Program,) eBooks and pBooks. MEAPs are sold exclusively through Manning.com. All pBook purchases include free PDF, mobi and epub. When mobile formats become available all customers will be contacted and upgraded. Visit Manning.com for more information. [ Use promotional code ‘java40beat’ and get 40% discount on eBooks and pBooks ]

What’s multitasking? It’s one of the important and exciting API features in iOS 4. When the end user quits an application, instead of termination, the application will enter the background state so that we can use this feature to support fast app switching, running tasks in the background. In this article, we will take a look at the basics of multitasking on iOS 4 and the applications life cycle.

Multitasking is a key feature that has been requested on the iOS since it was first released. It’s basically the ability to let the device run more than one application at once. For example, you may want to listen to music using the Pandora application while performing other tasks such as checking your email.

In the past, Apple had a few arguments opposed to multitasking on the iOS; the primary one was that it slows down the device and makes for an overall poor user experience. If you allow the user to run too many applications at once, the device will eventually run out of memory and start killing those applications. Another argument was that running many applications at the same time drains battery life much more quickly. Because running an app requires processing power, the constant strain on the processor will quickly result in a drained battery.

Finally, in iOS 4, Apple has implemented the ability for programs to run in the background. Figure 1 shows the multitasking UI on iPhone and iPad. This isn’t true multitasking per se, but it’s getting closer and addresses most of users’ other gripes. 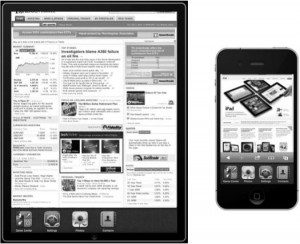 Figure 1 Multitasking UI on iPad and iPhoneApplications that wish to execute operations in the background are restricted to certain tasks, which include the following:

By default, all applications that are compiled for iOS 4 will support multitasking. But after the user taps the home button, the app will go into the background suspended state unless the background running mode is added.

Because most applications don’t require constant usage, the system automatically puts them in a suspended state when the user exits them. Upon resuming the application, it should load in the last state it was in when the user exited it. This is more of a fast application-switching model. A great comparison is when you are reading a book, you may want to take a break and get a cup of coffee, so you will put a bookmark at the page you stopped. Later when you are back, you can continue from the exact same page where you left.

With the iOS multitasking support, the application life cycle expands to not running, running in the foreground and running in the background (as shown in figure 2). 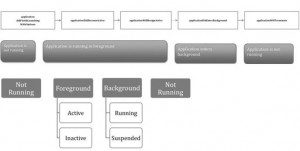 Figure 2 Application life cycle in iOS 4When the application first launches, it will move from the not running state to the foreground, stay inactive briefly, and become active. That’s the time when the MainWindow.xib file gets loaded into the application. While the application is running in the foreground state, an SMS message or an incoming call could pop out and interrupt the current application, which, therefore, will become inactive.

Sometimes, when the system is running low on memory, the heavy memory usage applications in the background will get terminated in order to free up more memory for the foreground application. Another possibility is when the user manually terminates the application from the multitasking UI stack.

In order to monitor the application’s transition states with the notification center, table 1 has a complete list of notifications. For example, you can use the code snippet below to register a notification for UIApplicationWillResignActiveNotification inside the view controllers.

Multitasking is really useful in so many ways. With the application continues running in the background, you can provide an amazing user experience with the iOS 4’s platform. We covered the multitasking basics and the application’s life cycle on iOS 4.