I am going to write down all the facts and points that are required to know about the static keyword in Java. At the end of this post, you can try few sample mock exam questions for testing your knowledge on static keyword. Note that these questions replicate the real exam question patterns. 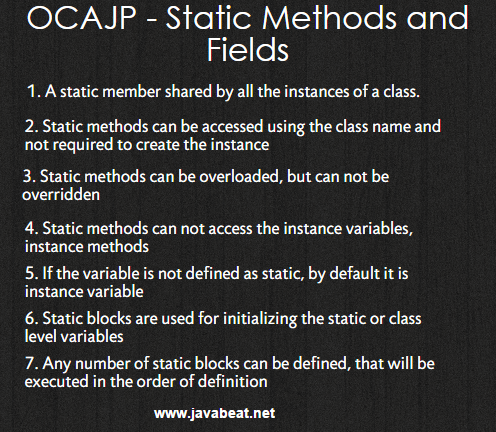 What is Static Keyword?

In Java, anything declared as static tells you one thing, the members are associated with class and not an instance / object of that class. The ideal situation when you require to declare static members are that the data has to be shared among all the instances of that class.
Look at the following example:

If you closely look at the above example:

With this simple explanation, we can conclude that static in other words it is a class lever declaration. So, it is utmost important to decide what to be exposed at the class level. In the next sections we will learn different way how we can initialize the static variables and methods in your class.

This tutorial going to drill down on the following three topics which are more important for the exam preparation. I would advise you to practice as much as possible to have clear understanding on different combination of usage. Most of the times exam questions test you the wrong statements and asks you to tell if the program will be compile or not.

Look at the following example for using static methods:

The above example gives you the basic idea on how to use the static methods.

Here is the matrix for static member access restriction:

Static fields or variables are the one which are declared with static keyword at class level.

You can look at the other examples in this tutorial to understand how to use the static variables.

Static initializers are the static blocks declared inside any Java class with the static keyword. This block gets executed at the class loading time. This block is used for initializing the static variables.

The following are the important features of the static blocks:

Look at the following example code for using static initializer:

Static imports are used for importing the static members from any class or interface. Static Imports is all about importing all the static entities – like static classes, static methods and static objects and directly accessing them in code. This is convenient since you are not required to know from where the variables are accessed. Once you use static imports, the variable name or method name can be used within that class. This featue has been added as part of the Java 5.0 Features.
Here is a simple exame for static import:

In the above example, static members are imported from the classes Math and System. Later on the class members are directly used without using the class name like System.gc(). I hope this helps you to understand the use of static imports in Java application.

Here is the few sample mock exam questions using the static keyword. If you would like to try more questions, please buy our OCAJP certification kit.

1. Which of the following statements are true?

2. What will be the output of the following program:

Which of the following statements are correct:

In case of primitives such an an int, it is the value of the primitive that is passed. For example, in this question, when you pass “i” to method, you are
actually passing the value 10 to the method, which is then assigned to method variable ‘i’. In the method, you assign 20 to ‘i’. However, this does not change the value contained in someInt. someInt still contains 10. Therefore, 10 is printed. Theoretically, java supports Pass by Value for everything ( i.e. primitives as well as Objects). Primitives are always passed by value. Object “references” are passed by value. So it looks like the object is passed by
reference but actually it is the value of the reference that is passed.