This article is based on Portlets in Action, to be published June 2011. It is being reproduced here by permission from Manning Publications. Manning publishes MEAP (Manning Early Access Program,) ebooks and pbooks. MEAPs are sold exclusively through Manning.com. All print book purchases include an ebook free of charge. When mobile formats become available all customers will be contacted and upgraded. Visit Manning.com for more information.

Inter-portlet communication using PortletSession is one of the most widely used techniques since Portlet 1.0. Data stored in APPLICATION_SCOPE of PortletSession can be shared with servlets/portlets that form part of the same portlet application.

I recommend that you import ch11_ipc_session eclipse project from the source code that accompanies portlets in Action to view the code listings presented in this section.

You can define multiple portlets in portlet.xml by adding a <portlet> element for each portlet that belongs to the portlet application. Listing 1 shows a portlet.xml file that defines the Book Catalog and Recently Added Book portlets.

Listing 1 shows that the Book Catalog and Recently Added Book portlets use the same resource bundle for labels/messages, which is not unusual.

portlets packaged in the same portlet application are usually closely related to each other in their functionality and mostly share a common code base.

Now that we have defined portlets in portlet.xml file, let’s look at how the Book Catalog portlet communicates with the Recently Added Book portlet using PortletSession.

Storing and receiving information from PortletSession

What information to communicate

We know how to pass information from the Book Catalog to the Recently Added Book portlet (which is by using PortletSession) but we don’t know what information we should pass. While developing portlets, you need to carefully choose what information you want to pass because that will affect the content generation logic of the target portlet.

Let’s look at possible candidate information that can be sent to the Recently Added Book portlet:

You can send any of these pieces of information to the Recently Added Book portlet, but there are trade-offs for each choice. If you send complete information via PortletSession, you are overloading your session. If you are only sending the ISBN number, you get a performance trade-off because the portlet will have to make a round-trip to the catalog data store.

From the receiver portlet’s perspective, the communicated information can be classified as shown in table 1.

In most scenarios, the partial information approach is used because the receiver portlet usually needs to process the communicated information to generate its content.

In inter-portlet communication scenarios, it is equally important to consider situations in which the communicated information is not available or was not delivered to the receiver portlet—the No information case defined earlier. The receiver portlet should show meaningful content even if the communicated information hasn’t been delivered or is unavailable. For instance, if the Recently Added Book portlet is completely dependent on the ISBN number stored in PortletSession for generating its content, it will not show any book details until the user adds a new book to the catalog. This gives the impression that no book has ever been added to the catalog and the catalog should be empty.

Listing 2 shows the addBook method of the BookCatalogPortlet class, which adds the ISBN number of the newly added book to PortletSession.

Listing 3 shows that the RecentlyAddedBookPortlet class does a lot of work to ensure that the content is meaningful in the context of user action. For instance, if it doesn’t find the recentBookIsbn session attribute or if it finds the ISBN number referenced by the recentBookIsbn session attribute doesn’t represent a recent book in the catalog then it executes a complex logic within the getRecentBook method to fetch the newly added book.

Earlier we saw how to write portlets that communicate using PortletSession. Now, we’ll see how our Book Catalog and Recently Added Book portlets communicate when deployed in a web portal.

Let’s look at the steps that we need to take to test communication between our sample portlets.

Because we want to test inter-portlet communication in situations when communicating portlets are located on different portal pages, you should create two portal pages named Book Catalog and Recent Book.

Figure 1 shows communicating portlets on the same portal page. To test the communication between the sample portlets, add a new book to the catalog. You’ll discover that the Recently Added Book portlet updates its content to reflect the new book.

So, now you’ve seen just how easy it is to get your portlets talking to each other, whether they’re on the same portal page or different ones. Next, we’ll take a look at the pros and cons of using PortletSession for inter-portlet communication.

Advantages and disadvantages of using PortletSession

Even though PortletSession was a preferred way to achieve inter-portlet communication in Portlet 1.0 days, it still has many advantages in Portlet 2.0 world.

Table 2 describes the advantages and disadvantages of using PortletSession as the means for communication between portlets. 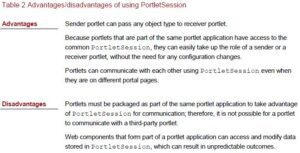 Table 2 describes the pros and cons of using PortletSession for inter-portlet communication, which you should consider before deciding the approach that you want to use for communication between portlets.

Some portal servers provide additional features to support the sharing session attributes between the portlets in different portlet applications. For instance, you can share the APPLICATION_SCOPE session attributes with portlets in other portlet applications using the session.shared.attributes property in the portal-ext.properties file. Note that such features are portal specific in nature and will result in portability issues.

In this article, we discussed how PortletSession, public render parameters, and portlet events can be used by portlets to coordinate with other portlets in the web portal. It is hardly possible to create a web portal with portlets that work in silos; therefore, it is important to carefully choose the inter-portlet mechanism that fits your web portal requirements. You may use three inter-portlet communication approaches in your web portal depending on the communication needs of the portlets. One of the biggest advantages of having portlets that communicate with each other is that such communication enriches the users’ experience of the web portal. Another advantage is that, at any given time, portlets reflect the content that is relevant in the context of user actions.