This article is based on iOS 4 in Action, to be published on June 2011. It is being reproduced here by permission from Manning Publications. Manning publishes MEAP (Manning Early Access Program,) eBooks and pBooks. MEAPs are sold exclusively through Manning.com. All pBook purchases include free PDF, mobi and epub. When mobile formats become available all customers will be contacted and upgraded. Visit Manning.com for more information. [ Use promotional code ‘java40beat’ and get 40% discount on eBooks and pBooks ]

If you want to write programs using acceleration gestures, we suggest that you download the Accelerometer Graph program available from Apple’s developer site. This is a nice, simple example of accelerometer use; but more important, it also provides you with a clear display of what the accelerometers report as you make different gestures. Make sure you enable the high-pass filter to get the clearest results.

Figure 1 shows what the Accelerometer Graph looks like in use (but without movement occurring). As you move the device around, you’ll quickly come to see how the accelerometers respond. 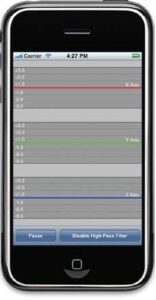 Listing 1 puts these lessons together in a program that could easily be used to report the direction of the device’s movement (which you could then use to take some action).

You start looking for movement whenever one of the accelerometers goes above .3 g. When that occurs, you save the direction of highest movement (#4) and keep measuring it until movement drops below .3 g. Afterwards, you make sure that at least a tenth of a second has passed so that you know you’re not in a lull during a movement.

Finally, you do whatever you want to do with your movement data. This example reports the information in a label, but you’d doubtless do something much more intricate in a live program. Cleanup is required to get the next iteration of movement reporting going.

This sample program works well, unless the movement is very subtle. In those cases, it occasionally reports the opposite direction because of the force when the device stops its motion. If this type of subtlety is a problem for your application, more work is required. To resolve this, you need to make a better comparison of the start and stop forces for movements; if they’re similar in magnitude, you’ll usually want to use the first force measured, not necessarily the biggest one. But for the majority of cases, the code in listing 1 is sufficient. You now have an application that can accurately report (and take action based on) direction of movement.

Together, gravity and force measurement represent the most obvious things that you can do with the accelerometers, but they’re by no means the only things. We suspect that using the accelerometers to measure three-dimensional gestures will be one of their best (and most frequent) uses as the platform matures.

Accelerometers can give you access to a variety of information about where a device exists in space. By sensing gravity, you can easily discover precise orientation. By measuring movement, you can see how the device is being guided through space.

Event Kit Frameworks in iOS4
Next Post: Preparing your application to use push notifications in iPhone and iPad