This tutorial explain the basic concept of singleton design pattern and how to use them. This is one of the pattern I have published as part of our Design pattern in Java series. If you are interested in receiving updates, please subscribe our newsletter.

Such classes are candidates to be designated as Singleton classes. The sole purpose of such a class is to ensure that only one instance of the class is created for the entire application and that instance is shared across multiple clients.

How to Write Singleton Design Pattern? 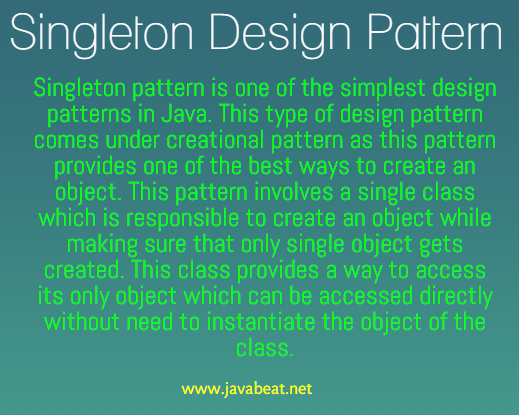 The output of the above program will be “Both the references are pointing to the same object”. There is one major flaw in our singleton class declaration. What if the client doesn’t use the MyConnection class? Since the connection object is maintained as a static object, the object will be loaded during the time of MyConnection class loading itself. So, let us prevent this by making the following changes,

Two well-known changes are noted in the code. One is the static object connection is not initialized in the declaration itself. The second change is the introduction of the new method initObject() which gets called whenever a clients request for the Objecr by calling MyConnection.getConnection(). The method initObject() creates a new object for the very first time only by making a comparison check.

Will the class works well in a multi-threaded environment? Certainly not. Why? Imagine two threads trying to access the MyConnection.getConnection() method. So, it is always wise to synchronize the object creation logic in the implementation. So the final revised code looks similar to this.

When to use Singleton Design Pattern

There is no definite answer for this question. The common thinking is that where there is a requirement to have only one instance of the class for the entire application, then singleton is the suitable answer.