It is always an interesting and exciting task to compare two popular frameworks. This time the contenders are two of the most popular microservices frameworks in Java. In this tutorial, I am going to compare the various aspects of Spring Boot and Dropwizard.

I have been working on Spring Boot for almost a year and completely inspired by the concepts of Spring Boot. Dropwizard is little older than spring boot in the microservices field. Also, it has gained good popularity among the community. I felt it is a wise decision to compare both the frameworks. 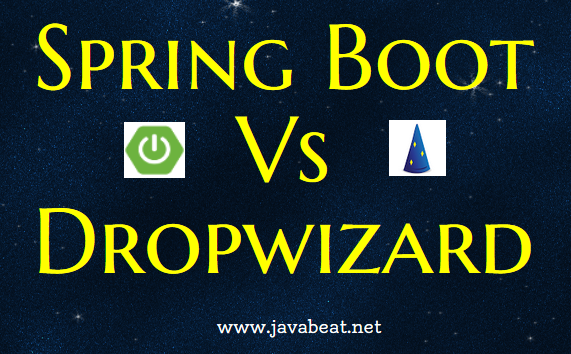 Here is the Table of Contents for this tutorial that explains the key difference between spring boot and dropwizard.

This table summarizes the key differences between these two frameworks. The subsequent sections explains each difference with more explanation.

Spring Boot supports Tomcat, Jetty and Undertow as the servlet containers. If you are not specifying any of the servlet containers in the Maven dependency, then it takes Tomcat as the default server and add the embedded version of  JAR file to the libraries. Spring Boot is more flexible on this aspect and leaves you to overwrite preferred http servers to be used. Here is the current version of containers support by Spring Boot:

Whereas Dropwizard is more strict on convention over configuration approach and it is allowing application developer to use only Jetty as the servlet container. You don’t have any choice to change the server configurations.

By default, Spring Boot uses it’s own REST implementations instead of standard specifications. But, you can easily overwrite the implementations to use either JAX-RS or Jersey libraries.

Dropwizard uses JAX-RS based Jersey as the default and only REST libraries supported for writing your REST APIs. However, this is not a bottleneck and good to use the JAX-RS standard for your applications. If you are using the specification standard, it is easy to switch to any other implementations that use the standard specifications.

Spring Boot supports a wide variety of libraries for the logging mechanism. It offers Logback, Log4j, Log4j2, Slf4j and Apache Commons Logging. By default, spring boot uses the Logback as the logging implementations. You can read our tutorial logging configurations for more understanding on how to use the logging with spring boot.

Whereas Dropwizard supports Logback and Slf4j as the only two libraries that can be used for the logging mechanism.

Logback is the most preferred logging mechanism as of now. Before log back, most of the projects preferred using the Log4j as the logging mechanism. However, log back offers many improvements over log4j and there are several reasons to use it over log4. So, both the frameworks support this implementation.

Metrics is one of the most important requirements for production applications. Without proper measurement, we can not evaluate the performance of an application.

Dropwizard uses its own solution for the metrics display. One of the great advantage for using Dropwizard over spring boot is to utilize its advanced metrics solution.

Whereas spring boot provides it’s own metrics and that is basic information compared to what is offered in Dropwizard. Even spring boot documentation recommends using Dropwizard metrics for any advanced functionality.

Dropwizard is very tightly coupled with Hibernate ORM Framework. Hibernate is compatible with JPA 2.1, but with dropwizard-hibernate, you cannot inject EntityManager for example, and you have to use Hibernate’s Session and SessionFactory. This is clearly a limitation if you want to use any other ORM frameworks apart from the Hibernate.

Whereas Spring Boot uses it’s own data abstraction framework Spring Data JPA. Spring Data module is written on JPA 2.1, so it is possible for us to use callback methods like prePersist, preUpdate, etc. Another good news is that Spring Boot works with many other ORMs other than Hibernate. It is not very easy to achieve in Dropwizard.

The main difference between both the frameworks is dependency injection support. Spring applications use its own dependency management comes with the Spring Core module. However, Dropwizard doesn’t have out of the box solution for the dependency management. You have to choose one of the solutions available on the market. Preferably you can use Google Guice.

8. Packaging JAR and WAR for Deployment

spring-boot-loader module in the spring boot supports executable jar and war files. Generating the JAR and WAR file are supported out of the box by just adding the packaging as JAR or WAR in the Maven or Gradle build file. Both WAR and JAR can be executed as the standalone service in your server. Also if you want to deploy in the application servers, the WAR can be used for that purpose. We are running several applications in the traditional application servers where we don’t need the executable JAR and we only require WAR file to deploy. Spring Boot helps you to generate your needs for the peaceful deployment.

If you look at the above structure, all the dependency JAR files are added inside the lib folder as the nested JAR files.

Dropwizard doesn’t officially support the building of WAR file in its build file. It is against its concept of microservices. But, you can use one of the existing community module for building the WAR files. This is again an extra burden for the developers.

Dropwizard was initially released by Coda Hale in late 2011 back in his days at Yammer. Dropwizard has great community support but the release cycle are slow. In the initial period of its inception, the release cycles are much faster and every month’s new release was planned. But, most recently the releases are slower and also every release has more updates to the third party libraries than any update to the core framework updates.

Whereas Spring has the strong support from Pivotal which owns the spring framework. Spring Boot first introduced in 2014 (just two years back), but since then they have added lots of official modules for most of the third party libraries. The release cycle is quicker and they add lots of exciting features for every new release. The latest release is 1.3.0, they have added new features on spring boot actuator and new module DevTools which improves the development time.

If you have any questions, please write it in the comments section. If you are looking for any help or support for implementing the Spring Boot applications, please drop a mail to us. We will get back to you with answers for your queries.

Thank you for reading my blog!! Happy Reading!!