There are two annotation used for defining the named queries, 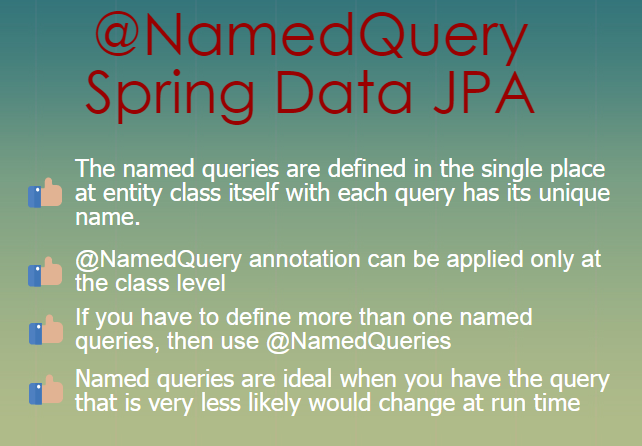 The following are the steps required to implement named queries in your application.

Second, Create Spring Data Custom Repository and create a query method. The method name and the named query name in entity class must be same. Ensure that you are not using @Query annotation with custom query. Because, @Query always takes precedence than other options.
Here is the sample repository interface for the above named query.

Named queries are ideal when you have the query that is very less likely would change at run time. Here I would list down the characteristics of the named query, it will help you to arrive at your decision whether you have to go for named query or not.

This example source code contains many examples of Spring Data JPA and not just for @NamedQuery. This example uses Spring Boot for packaging and deploying spring application.

In this tutorial I have explained how to use @NamedQuery and the advantages of using named queries. Using named queries are ideal when the queries are static and less likely modified at the tun time. Also it is easy to migrate an existing applications to spring data jpa.

If you have used named queries in your project, please share your experience and thoughts in the comments section. The best comments will be updated to this tutorial and will be select for free book promotions.