One of the common misunderstanding among Spring Framework developers is the difference between Spring Singleton and Java Singleton. Interestingly this turns out to be one of the popular interview questions for spring developers to check the understanding of singleton concepts.

Java singleton class is per classloader and Spring’s singleton is per application context. 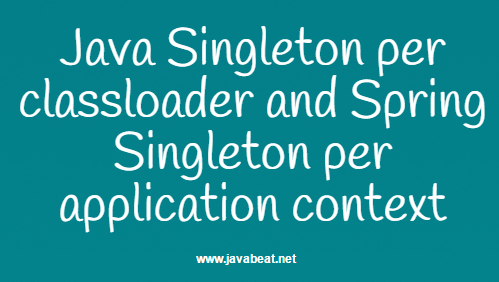 With the above basic rules, one can classify Java Singleton implementation into the following categories:

Here is the example for eager initialization of singleton instance:

This also falls under the eager initialization, the only difference is that instance creation is completed inside the static initializer block.  This approach doesn’t provide any option for exception handling.

Here is the example for static block initialization of singleton instance:

This approach works fine when this class is executed in the single threaded environment, but this will not work fine in the multi-threaded environment when multiple threads are trying to get the new instance simultaneously (Read : Threading in Java).

The scope of the Spring singleton is best described as per container and per bean. If you define a bean for a particular class in a single container, spring container will create only one instance for the class. In spring, singleton is termed as one of the scope for defining the beans. Singleton scope is the default scope for spring beans.

Here is the example declaration of Spring’s singleton beans:

When you think of singleton instance, the first question pop-up in your mind is the thread safety of your application. Spring’s singleton beans are shared among all the requests when your application is running on the multi-threaded environment. How to ensure that your program is thread-safe?.

It is important to remember that your singleton beans should not store any state information. Because the bean instance created once will be shared across all the threads that are requesting for that spring bean. If you inject an object to spring’s singleton bean, it is wired only once and it never get refreshed. It is ideal to make all the controllers as the singleton beans and value objects as the prototype beans.

In the above code snippet, ValueObject is declared as prototype bean in the XML configurations. However, this object will be injected only once when first time SampleController instance is created. After that the same object will be used for all the requests. In that case, the variable i and vo, should not maintain any state information, otherwise those will be across all the threads.

For example, when the variable i is incremented by one request is shared to another thread. This will lead to confusion and the application won’t be thread safe. To avoid that, don’t declare any instance variable that stores the state information in singleton beans.