In this article I’ll give a brief overview of the ExtJS a JavaScript framework, which is most popular today, due to the features and quality it offers. External Javascript or ExtJS as it is called, is a JavaScript framework that was initially designed to be an extension of the YUI framework (Yahoo! User Interface Library ) . It was named at the beginning of its development as yui-ext and YUI as its basis for work, so its operation was not possible without the use of YUI.

Its distribution is done through two licenses,

Besides these two licenses, there is a support service that could be purchased individually, where the user acquires the right not only through the support forums, but also through e-mail, telephone, and if necessary, the user could purchase a higher membership level and also be entitled to support via onsite, having access to the SVN Ext JS, where he could find versions of Ext JS in development and yet-to be released versions.

The yui-ext, throughout its development, has been getting new adapters that serve to make the connection between it and other JavaScript frameworks such as Prototype and jQuery. The growth of its features and interface components that have brought value to the most popular JavaScript frameworks like YUI, jQuery and Prototype, made it quickly recognized by developers and contributors, generating greater speed to the emergence of several versions of the yui-ext 0.x., before finally being released as version 1.0, it got its name changed to ExtJS; showing that ExtJS is no longer just an extension to the YUI framework.

It came to be known as a framework after version 1.1 was released. Thereafter, new versions continued to be developed and with them came new functions and basic components redesigned to be more effective and required fewer lines of code.

The ExtJS currently supports the most popular browsers like:

To use ExtJS, we first need to download the same through the following link: Donwload ExtJS. On this page we find two download options: a free version and the commercial version. 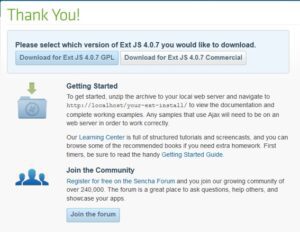 To download the free version, click on “Download fot Ext JS 4.0.7 GPL“. Save to a directory of your choice. After the download is complete, simply decompress the Zip file. The file that we downloaded, will give us the following folder structure:

To begin using this framework, we will create the file index.html. The directory structure of our code and the library will be as shown below:

Inside the of index.html file we will include the files needed to run the ExtJS i.e

Let ‘s see the details of the preceding code:

Now that the code is ready, let’s test it. To do this, open the file “index.html” in your browser and we get the following result: a blue window in the middle of the browser and if we click on the close button, this window will be closed blue window, as shown in the following figure .

Figure 4: Results of the test example of ExtJS

However, as it is an object of Ext JS, we realize that with Ext.get the returned object has all the properties and methods of the object Ext.Element. And the property Ext.get (‘desiredElement’). Thus using the Ext.get can use events with ease. As we can see, in this case we associate an event to the button with id “btclose” using method “on“, which takes three parameters:

Hence we connect a function to the click event of the button that caught our variable which has the window and it executes the method “close” to close. If the result is not the same as shown in Figure 4, make sure your code is the same as shown above.

In this article we can conclude that ExtJS streamlines the development of web applications, with tools to develop attractive, efficient and mostly functional interfaces. That’s why it leaves ExtJS developer without concern for the visual part, which in most cases is not as important as the treatment of data. If you have any questions, write it in the comments section.