Apache MyFaces Trinidad 1.2 In this book, you will learn how Facelets and Seam are used to get the most out of JSF. You start out by learning where Trinidad comes from and what its aims are. Additionally, you will also learn the often occurring tag attributes and, in particular, Trinidad’s Ajax technology. You will implement login, authorization, navigation, internationalization, polling and browser issues with the help of these technologies. You will then use Seamgen for deployment.

As you move through the book, you will develop a web application example where a series of selected Trinidad components are applied and their capabilities explored.Finally, you will master the Trinidad dialog framework, a Trinidad key technology that allows the application of dialogs.

What This Book Covers

Chapter 1, Introducing Trinidad, introduces you to the Trinidad component library. We give a general idea of this component library, the areas covered by its components, and compare it to other libraries. Finally, the integration of Trinidad and Seam is discussed.

Chapter 3, Most Wanted Tags and Tag Attributes, discusses the Trinidad tags and theirattributes in a structured approach. You will gain an insight into the design of Trinidad allowing you to draw an efficient mental map of the library and make an effective selection and application of tags.

Chapter 5, Web Application Groundwork, teaches you how to develop the basic parts of the web application that serves as our Trinidad example. We present using Seam-gen to rapidly deploy after each change of any file.

Chapter 6, Building a Panel-based Content, deals with Trinidad’s panelAccordion and showDetailItem components to show how they can be combined to build panel-based, panel-wise collapsible content.

Chapter 8, Growing a Tree, deals with Trinidad’s tree components and models and exemplify their application. We present an effective shortcut that makes Trinidad’s tree support an easy, and yet powerful, technology.

Chapter 10, The Chart Component, deals with Trinidad’s chart component and shows its application. You will learn to competently set up representation parameters, effectively achieving the intended representation focus and thus graphically materializing hidden
information in an appropriate way.

Chapter 11, Building a Wizard, deals with Trinidad’s components to implement a wizard and show their application. We present a solution to avoid an existing Facelet problem.

Chapter 12, Dialogs—Pop Up Your Web Application, discusses Trinidad’s pop-up window techniques. We revisit Seam conversations to address the specific necessities for pop-up dialogs in Trinidad and Seam. We enhance the web application with a couple of pop-up windows including wizard pop-up support.

Most Wanted Tags and Tag Attributes

This chapter discusses the Trinidad tags and their attributes in a structured approach. The reader will gain an insight into the design of Trinidad allowing them to draw an efficient mental map of the library and an effective selection and application of tags. More concretely, the following topics are covered:

Trinidad’s approach to web technology is comprehensive: Aimed at full control of all the bits and pieces that make up a web application, little should be left that needs to be added. So based on such a closed world, Trinidad presents itself with a wealth of components and tags that even include very basic XHTML tags as replacements for the real XHTML originals. This is no radical replacement approach, rather it enables Trinidad to remain in full control of mechanisms such as partial-page rendering (PPR, also generally known as Ajax) that otherwise would need to deal with potentially incompatible libraries externally (refer to Chapter 1, Introducing Trinidad, for further discussion).

Trinidad is divided into the following two namespaces: 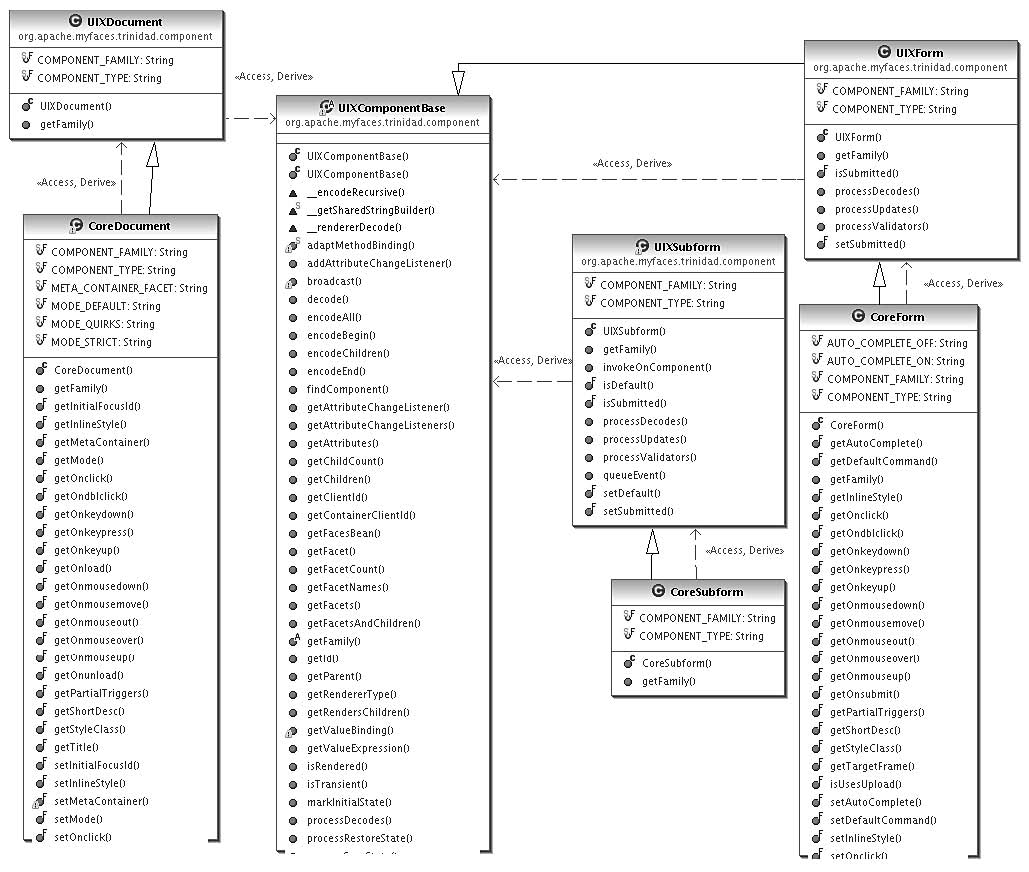 Two groups can be distinguished from the trh namespace. The first one deals with the definition of an XHTML page and provides the developer with the following tags:

The second group deals with the layout of an XHTML table:

The attributes of each tag are defined in a most consistent, and thus recognizable, way that will be seen in detail later in this book. By the way, there are also tags for the construction of framesets such as
trh:frame in case anyone still wants to make use of framesets.

However, before we deal with the attributes let us conclude this structural over view by a look at the organization of the functionality of the core tag library.

The following groups can be functionally distinguished which is also refl ected in the packages structure of Trinidad’s API (all beginning with org.apache.myfaces. trinidad.component; which has been left out here to avoid repetition). Note that, for completeness, we will also include information on the pure Java side as well as information on the few components that stem from the trh namespace:

There is a lot more to be found on the pure Java API side that either surfaces indirectly on the tag library as attributes, or is used implicitly by the tags themselves. Furthermore, there are utility classes and context support classes—RequestContext being probably the most prominent one because it offers a lot of functionality, for example, PPR from the server side. This is described in the upcoming chapter.

The following figure illustrates the Java side of things (it shows what the structure of some of the classes behind core.input look like): 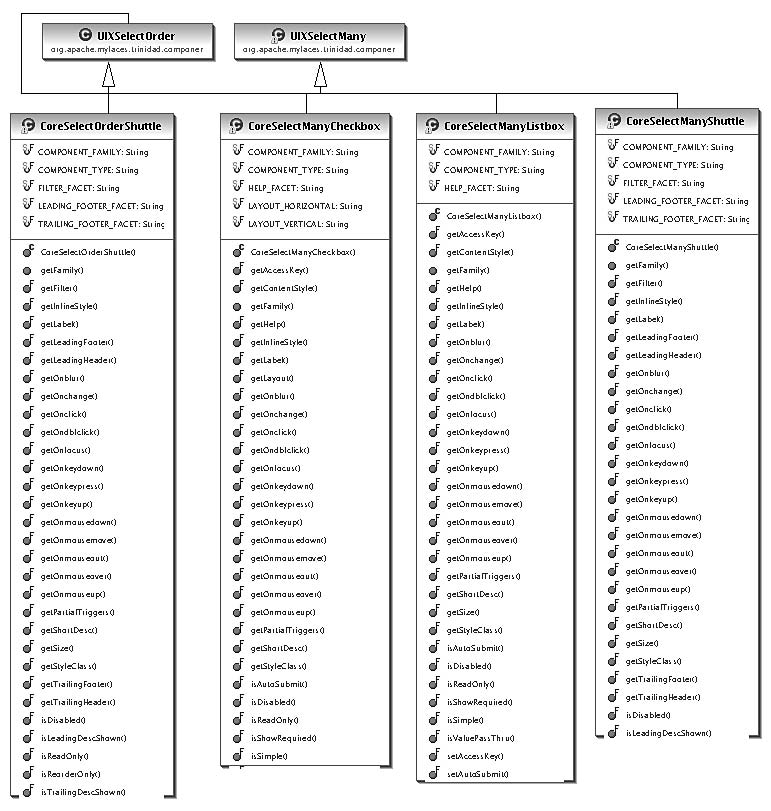 The preceding figure is an outline of the core.input API hierarchy. Again, we can see the typical UIX* and Core* structure.

Finally, let us take a closer look at the tag attributes.

We begin by taking a closer look at the attributes that practically always occur, no matter which tag is actually involved.

As mentioned before, this occurrence is because of Trinidad’s
design which is noted by its consequent application of attributes
that are shared by many different tags.

Let’s take a look at the attributes that almost always occur in certain tag groups(mentioned in the beginning of this chapter):

Attributes that occur in form and display tags

This relates to the second tag group we learned in the earlier section named Trinidad’s core tag library namespace (tr). The following Trinidad-specific attributes occur there:

A series of attributes in this group are those that stem from the core JSF tag libraries:

Finally, in this group are listener attributes which come both from pure JSF and Trinidad:

Attributes that occur in command and navigation components

These are attributes that occur in the third tag group. We have learned about the command and navigation tags, to which these attributes are related, in the earlier section. Here we can see their attributes:

Attributes that occur in large input and output components

These attributes come from the fourth tag group, the rather heavyweight input and output components as described in the beginning section. They can be further grouped into the following attribute categories:

In the following section, we will give an overview of each of the above attribute categories.

The tag attributes for table, treeTable, and tree

First, we come across a couple of listeners that deal with selection and disclosure:

The tag attributes for table and treeTable

A series of facets are supported that deal with the inclusion of developer own parts in certain areas of the views:

A couple of specific listeners are provided to deal with sorting and range change:

In connection with the sortListener table and treeTable, we need to provide the following attribute for setting up a selection mode:

The following series of attributes deal with the general view setup:

The tag attributes for tree and treeTable

There are just three attributes that are specific for both tree and treeTable:

The tag attributes for treeTable

The treeTable tag is exclusively supported by the following attributes:

The tag attributes for tree

Actually, there is only one attribute here that exclusively supports this tag:

We have seen what Trinidad is all about with regards to its component set. More concretely, we have first looked at the XHTML-focused Trinidad namespace trh that basically contains a component set for XHTML layout.

Furthermore, we looked at Trinidad’s core namespace which is its tr JSF tag library. It contains a large component set with various types of components for basic document composition, form input and display, command and navigation, large and basic input and output, layout, models, converters, validators, events, and event listeners.

Finally, we looked at the attributes of all those tags and found out that a straight-forward orientation along tag groups is possible. This is thanks to Trinidad’s framework character.