Load testing and stress testing are different testing activity that are often confused among the developers. Both are measuring the performance of the application but the difference is that they measure at different conditions. In simple words, load testing tests with large amount of users but stress testing tests with too many users, too much data, too little time and too little resources. In this short tutorial, I would explain the key differences between load testing and stress testing with simple examples. If you have any questions, please write it in the comments section. 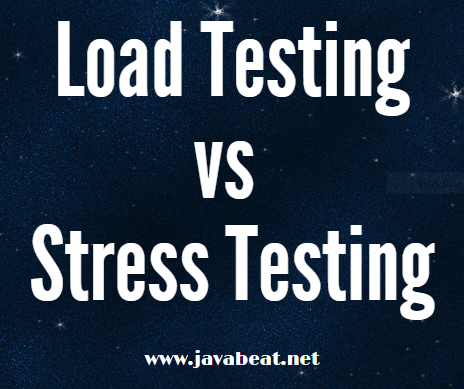 What is Load Testing?

Load testing is conducted to a system to test the behavior of the system under the specific amount of load. Most commonly load test refers to the number of concurrent users accessing the system. The output for this testing is the response time for the requests under a specific load as mentioned in the requirements.

Example: The requirement would say that system has to respond with in 5 seconds for every request with the maximum concurrent users of 10000. In this scenario, you will have to simulate the behavior of system so that 10000 users accessing the system simultaneously and test the response time if that meets the system’s performance requirements.

What is Stress Testing?

Example: In the above example for load testing we have learnt that it checks for the specified number of users whether it responds within stipulated time period, but stress testing would checks what is the maximum number of users that can be responded till server’s resources are exhausted and finally server can not respond.

There are many popular load testing tools available in the market. Here I am listing down few of the well tools for performing the load testing.