I am going to divide this post into following topics for ease of understanding to the readers:

What is a WebSocket?

It is a feature being introduced as part of the HTML5 specification. It introduces a way to create a full-duplex communication channel between client and server over TCP. This is in addition to the conventional Request-Response communication via the HTTP between client and server. To quote more better definitions from different sources:
From Introducing WebSockets on HTML5Rocks:

The WebSocket specification defines an API establishing “socket” connections between a web browser and a server. In plain words: There is an persistent connection between the client and the server and both parties can start sending data at any time.

From an article in MDN:

It is a technology that makes it possible to open an interactive communication session between the user’s browser and a server. Using a WebSocket connection, Web applications can perform real-time communication instead of having to poll for changes back and forth.

WebSocket is an application protocol that provides full-duplex communications between two peers over the TCP protocol.

In the traditional request-response model used in HTTP, the client requests resources and the server provides responses. The exchange is always initiated by the client; the server cannot send any data without the client requesting it first. This model worked well for the World Wide Web when clients made occasional requests for documents that changed infrequently, but the limitations of this approach are increasingly relevant as content changes quickly and users expect a more interactive experience on the web. The WebSocket protocol addresses these limitations by providing a full-duplex communication channel between the client and the server. Combined with other client technologies, such as JavaScript and HTML5, WebSocket enables web applications to deliver a richer user experience.

The HTML5 WebSockets specification defines an API that enables web pages to use the WebSockets protocol for two-way communication with a remote host. It introduces the WebSocket interface and defines a full-duplex communication channel that operates through a single socket over the Web. HTML5 WebSockets provide an enormous reduction in unnecessary network traffic and latency compared to the unscalable polling and long-polling solutions that were used to simulate a full-duplex connection by maintaining two connections.

In each communication channel there will be two end points namely:

The Client and Server end points can be created in 2 ways namely:

In this article I will focus on using Annotations to create Server End points.

We annotate the class which we want to serve as a server end point with @javax.websocket.server.ServerEndpoint and pass in the URI to locate the end point. There are various parameters which the annotation takes in and one of them is the value which holds the URI to locate the end point. Once we have an end point, this end point can receive data of formats namely String, Binary which are generated by the application. In this example I will look at how to receive String messages and then send back string messages to the client end point.

The method which receives the messages is to be annotated as @javax.websocket.OnMessage. And in our example it will accept only text messages, as a result the method would accept a String parameter along with another parameter of type javax.websocket.Session. So before I proceed further lets look at the classes involved in creating annotated server end point:

Lets look at the code for creating the Server End Point:

/**
* counter to track count of messages received.
* This instance variable is specific to one client. Which means that
* for each client connection one instance of WebSocketDemoEndPoint is
* created.
*/
int counter = 1;

Now that we have created the Server End Point, we will make use of the Javascript WebSocket API to create a client end point and connect to the server end point and exchange messages.

All the heavy duty work of setting up the event handlers and managing the WebSocket connection is done by the Javascript. Let me explain in brief about connecting to a WebSocket server end point. In our example the URI for the end point is: “/DemoApplication/webSocket”, so to connect to this URI from Javascript we have to do the following:

And the websocket can be closed by invoking the close() method on the websocket object. One thing we missed is about sending messages to the other end point. In the WebSocket API we have 4 states for a websocket to being: CONNECTING, OPEN, CLOSING, CLOSED. And the state of the websocket can be obtained from the readyState parameter as shown below:

Lets look at the complete Javascript code for this sample:

}
websocket.onerror = function() {
wsStatusDiv.innerHTML = "ERROR while connecting to the web socket";
}

Once you have deployed your changes and load the webSocketDemo.jsp you will initially see this screen: 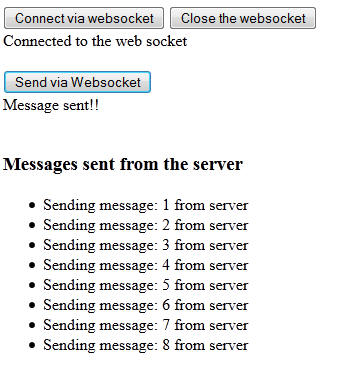 And you will also find the data sent from the client to the server printed in the server’s console logs:

I hope this article is helpful to understand the one of the greatest new feature introduced in the Java EE 7.0. With Web Socket, it is easy for the client and server communication to transfer multiple data requests. Please try out the example provided in this tutorial and post your comments. Also follow us in the social network to get the latest update on Java tutorials.